It’s been a really, really long couple of months, but the short version is Hubby has been in the hospital for 8 days for necrotic pancreatitis, and had surgery to remove a portion of his pancreas and remove his gallbladder.

Shortly after he came home from the hospital, my little Momo fell off the bed and broke his leg in two places.  For a couple of weeks, they thought it would heal in a cast, but eventually, it was decided that the leg had to come off, as the bone was not knitting.

Pepper in other various and sundry ‘crappy life stuff’, and I’ve not had a single thought put towards sewing for what feels like forever.
Now that things are settling down, I am hoping that I will be able to get back into the swing of ‘doing things’; especially sewing things!
The current project is to help my sister get my two older nephews suited up in doublets for their respective birthdays!
So far, we have all the bits cut out, and the peplums sewn.  A couple more serious sewing sessions, and we should be done.  Hooray! 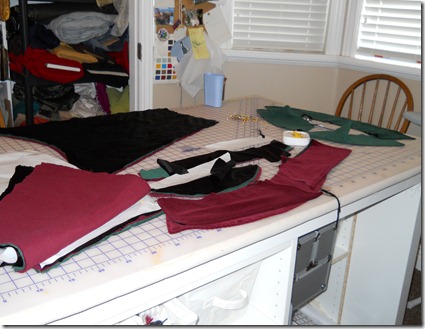 I’ve officially withdrawn from the ACC, but if things continue to look up, I’ll probably try to play along anyway.
Also of semi-related note, I’m in charge of scheduling the upcoming Collegium, and I am breathing a heavy sigh of relief that I’ve actually had time to devote to it, and things seem to be in place.
I’m also co-teaching a couple of classes at Collegium, so it’ll be a long day!
I apologize to any readers I still have out there…..I promise I’ll be gearing back up to a regular posting schedule!