So.  Updating regularly during the sewing extravaganza….not going so well.  Mostly because the 18th c is trying to kill me.  Kill me dead.  There were some major issues RE: back pleating/neckline yoke, but for the most part, they have been sorted out.
There are some serious fitting issues in still to be addressed in the pictures below, but just to prove that we have, in fact, done something, here is some proof: 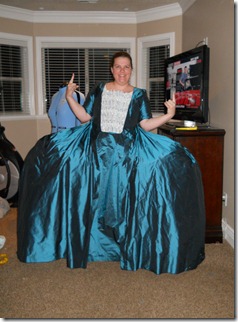 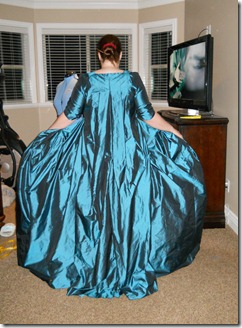 The wide gap in the waistline of the first picture has been narrowed quite drastically, and I’m still pondering how to fix the bagginess of the side seam (probably involving unpicking seams and re-doing them outright), and some lining issues to be sorted out, but it at least looks like a dress.
I really just want to lick Kendra’s brain and gain enough knowledge to get this bloody thing done so we can move on to the enormous list of other things to be done this trip.  The schedule is woefully behind at this point, and I’m getting nervous!

Email ThisBlogThis!Share to TwitterShare to FacebookShare to Pinterest
Labels: 18th c, Other Noelle