I would say my Dickens gown, but since Melia and I have such similar measurements, we're going to be trading off gowns throughout the fair.  I'm making one new gown, and refurbishing my green gown so we both have something to wear.

I haven't quite decided which seams will be piped (at least sleeves and back curves and neckline - maybe waist and wrists as well?), so I just made a whole load of piping, so I would be ready for whatever I decided to do down the road......

I used 2" wide strips of bias, and using a zipper foot, sewed against a core of cotton cord (some cheap white off-brand cone of cotton crochet yarn I bought about eleventy-billion years ago, like Sugar & Cream, but cheaper!) 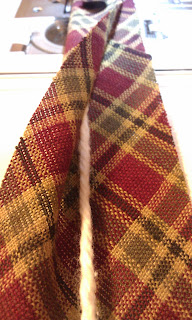 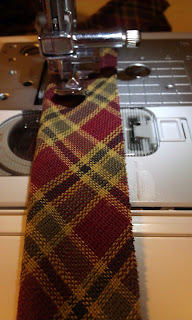 I ought to have taken pictures while I was doing it, but here is some awesome paint illustrations... :) The easiest way, I've found, to cut a moderate amount of bias is to open up the fabric: 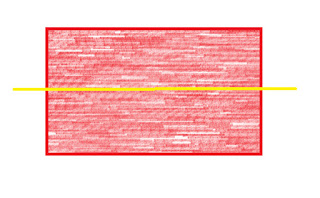 and fold so the cut edge is matched up to the selvedge:

And at this point, you can cut the bias starting on the fold.  If the fabric is thin enough, you can fold one more time, and cut through 4 layers.  (Cutting bias is SO MUCH easier with a rotary cutter.  I'd highly suggest using one!)  The first cut on the fold should be 1/2 the width of the total width of the bias strip.  Every cut thereafter should be cut the full width.