Ironing and Ironing Accessories pt. I

It has to be said, I'm kind of a junkie for sewing gadgets and gizmos.  One of my most used types of sewing room gadget is anything to do with ironing.  (Since it's kind of my.....thing)

It's kind of a disease! (an enjoyable one, but a disease nonetheless) 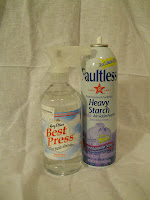 Spray starch in a can is a total rip-off, and way too expensive!  So, what are the alternatives?  (That one itty bitty bottle of Best Press was $6.95!!) 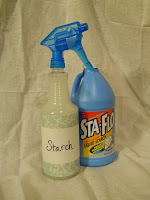 I like to use liquid starch (Sta-Flo, to be exact), and make up my own in a spray bottle.  It's nice to be able to formulate different strengths and not have to go buy a new can every time!  I've found a good balance is just a little less than a 1:1 ratio.  (This is the same stuff I've used to soak partlets and petticoats, and anything that needs a stiffer starch set) 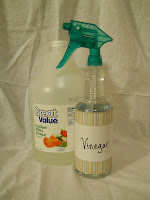 Starch is amazeballs, but when you need a nice press set, without all the starchiness (for example, pleats in silk; a spray bottle of about 1/2 white vinegar, 1/2 water totally does the trick.  I've not had it stain or spot anything (yet), and it gives a nice crease and set to things without the crunchiness of starch.  (Don't worry, the vinegar smell dissipates quickly - you won't be walking around smelling of pickles!)  Kind of works the same as Mary Ellen's, but way cheaper, though not as nice-smelling.  (and in some respects, works better, I think!) 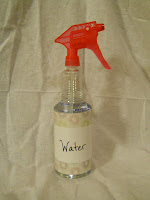 Pressing cloths are amazing - use them, love them.  If you don't have any yet, I would suggest starting to collect some out of scraps or stash - at least 1 canvas/duck, 1 muslin, and 1 silk organza.  White is the best - no fear of colors bleeding.  Making a pressing cloth is the easiest thing in the world - just cut out a piece of fabric (about 12"x12" or so) and zip around the edge with a serger or zig-zag.  (Here is a great list of the uses for different types of pressing cloths)

Inbetween starch and pressing cloths is something called a 'Rajah Press Cloth'.  It's supposed to set in/take out creases in poly and poly blend fabrics.  I don't use mine very often, as I don't use poly very often at all....but just so you know, it's out there....

A neat trick is to slightly dampen the press cloth (with straight water, or water/vinegar) - it gives kind of the same effect of using steam from the iron, but is a lot more gentle.