Uh….if I told you aliens abducted me, so that’s why I haven’t posted, would you believe me?


What?  No?
Oh.
Um…..well, life has been capital C     C-R-A-Z-Y.
And then there’s getting ready for Barons War.  Which is only a few short weeks away.  Yikes!  Good news is, there is more or less only the whites for hubby and I to go (plus some other nit-picky things as far as the clothes go….I’ll get into one of those things in just a few paragraphs.)
But I should update on what I’ve been sewing on!  Although there has been silence on my end, and my steam is certainly running out, I’ve still managed to be somewhat productive.
Here’s me with tiredface and wild hair.  But look at my hair – not really the hair, but the pearls and bows!  Since all of my hairpieces match my old hair color, I also need to make more braids; I have two different shades waiting for me to test out and make up some hair pieces.  (The ribbons are gold….kind of hard to see in this shot, but are trying to mimic the pink ribbons in the portrait below….) 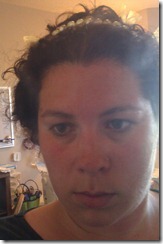 I didn’t have enough gold findings to do pearl-and-gold as I was originally thinking of, but I think plain pearl suits me better anyway.  I’m really mostly a plain-jane kinda gal.  Here’s one of the portraits that has the hair action I’m kinda going for:

Here’s one later than my target date, but is plain pearl, sans bows:


And here’s the ‘big’ update……the Turkish coat is nearly done!  (I’ll explain the ‘nearly’ part in a minute…..) 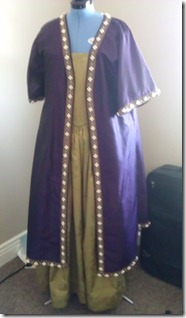 Over all, I’m pretty happy with it!*  It’s a bit shorter than I had originally planned, but what with limited fabric and somewhat wonky hem action, there wasn’t much I could do about it.
What is really bugging me, however, is the skipped space in the trim.  Of course it didn’t happen, yanno, on the hem in the back or something.  No.  Right.  Smack.  In.  The. Front.  See it? 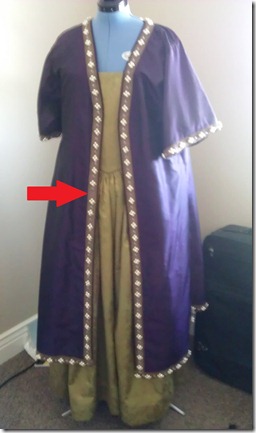 Of course I didn’t notice it until all the trim was sewn on and I put it on for the first time and looked in the mirror.  I saw it and about had a breakdown.
Anyway, so my options thus far are as follows:
I was going to put massive pearl buttons on the  edge like on the portrait, but because now of my epic fail, I may cut off the crystal spacers for 8” or so and pretend that I meant to put the buttons on the trim instead of next to it.  This seems like the least time-intensive option, though not perfect.  My ARness wants me to rip the trim off completely and re-do it all, but that is just not gonna happen.
Below is a detail of the trim on the portrait…..see how the buttons are on the edge of the trim?

So, opinions please:  Just how dorktacular would it be to move the ‘buttons’ over to the center of the trim to hide my boo-boo?  Like so: 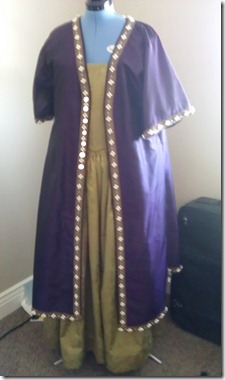 Ok, enough angsting about that for a minute.  Here is a close-up of both the neckline and the sleeve: 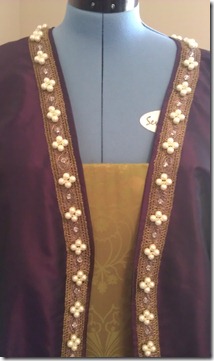 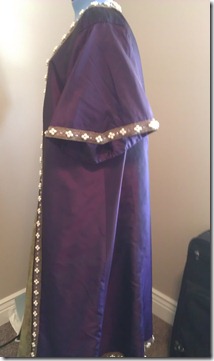 ETA:  I should mention that the reason I’ve not listed re-spacing the beading as an option is because the trim has little spaces for each of the elements, so I’m not sure if I’d like putting the crystal in the ‘X’ of the undulation rather than in the center as the rest of them are.  Dunno.  Does that change anyone’s opinion?  (Um, yeah, it is much more obvious IRL than it is in this crappy pic.)

Also of note, whether I end up using the partlet I’m not-quite-in-love-with-for-this-outfit is done, thanks is large part to my momma and Elizabeth!  I do like this partlet, but maybe just not for this dress.  I’m still undecided! 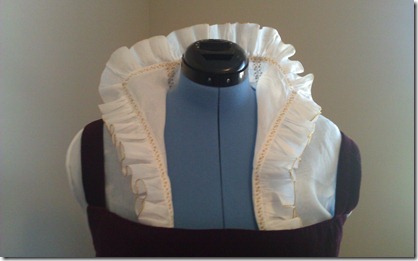 Also of note, I picked up the blackwork for my camacia (potentially new/4th partlet) from the ever-fabulous Jaquelinne this past weekend.  It is smashingly awesome.  Seriously, you have no idea!  My goal is to get that piece into a finished garment by the end of the week!
I also dropped off linen with my Apprentice sister at fighter practice yesterday and she posted last night about her blackwork progress for my hubby’s shirt.  Holy cow can that woman embroider!!!

*It’s short, the sleeves are much wider than I had intended (but look less crazy big when my arms are in there), the bust/waist are not as fitted, but hey, that means it’s more comfy?