I have an addiction to rose-flavoured sweets….

……and it is imperative that I try out this recipe! And even more awesomely, apparently it’s adapted from a recipe in '”The Accomplisht Cook” by Robert May (1660)

1. Soak the leaves of gelatin for 5 minutes, then squeeze out and dissolve in rosewater in a cup, placed in a pan of boiling water.

2. Gently heat a quarter of the cream, dissolve the sugar and then stir in the gelatin.

3. When it has dissolved, remove from the heat and add the rest of the cream.

4. Pour into a wetted mould and chill until it sets.

5. Tip from the mould and decorate with petals or fruit.

I found this recipe when I went searching for something comparable to these delicious little guys:

I haven’t found anything yet, but really all it is, is chocolate-dipped rose fondant, so really, it shouldn’t be all that hard!

And while searching for a picture online for the Beech’s Rose Creams, I found out that there was such a thing as Violet Creams. (!!!) 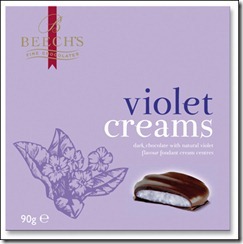 * I didn’t look too hard, but there are a few different recipes that call for cream & rose in some sort of boiled pottage pudding, the first more of a custardy pudding, and the second more of a gelatiny pudding. (Which is the one I would assume the modern interpretations above is taken from) I would actually like to try both of them at some point!

Beat the yolks of three eggs, with rose-water, and half a pint of cream, warm it with a piece of butter as big as a walnut, and when it is melted mix the eggs and that together, and season it with nutmeg, sugar, and salt; then put in as much bread as will make it as thick as batter, and lay on as much flour as will lie on a shilling, then take a double cloth, wet it, and flour it, tie it fast, and put it in the pot; when it is boil’d, serve it up in a dish with butter, verjuice, and sugar. (pg.177)

To make other white Jelly.

Boil two capons being cleansed, the fat and lungs taken out, truss them and soak them well in clean water three of four hours; then boil them in a pipkin, or pot of two gallons or less, put to them a gallon or five quarts of white wine, scum them, and boil them to a jelly, next strain the broth from the grounds and blow off the fat clean; then take a quart of sweet cream, a quart of the jelly broth, a pound and half of refined sugar, and a quarter of a pint of rose water, mingle them all together, and give them a warm on the fire with half an ounce of fine searsed ginger; then set it a cooling, dish it, or cast it in lemon or orange-peels, or in any fashion of the other jellies, in moulds or glasses, or turn it into colours; for sick folks in place of cream use stamped almonds. (pg. 206)

Email ThisBlogThis!Share to TwitterShare to FacebookShare to Pinterest
Labels: Other Stuff