Things have changed so much in the last 4 months - so I figure, why not one more change?  Let's get back into the costuming swing of things?!

Despite mounting social anxiety, I forced myself to go to Southern Regional Collegium this past weekend, and attended some classes taught by the fabulous, kind, talented, beautiful, knowledgeable, (and a whole bunch more adjectives) Tullia da Ferrara.  Even though I showed up late (thanks a lot, Best Buy), and had to leave early (thanks a lot, anxiety), I had a wonderful time seeing some friends I have not seen in a Very Long Time.

It's a bit late for new years resolutions, but mine will officially be "make more stuff", and "do more things".  Which doesn't sound like that big of a deal, and very vague but really, I promise, it is.  (A big deal, that is.  But also vague.)

With all the upheaval recently, I'm in a new house which means, I have to start all over with my craft room.  I have plans.  Hopefully cunning ones.  (I may even post pictures.  Brace yourself)  I'm hoping to get my sewing room squared away this weekend, in preparation of "The Return of Serafina's Stash Unlock'd: Part 3" 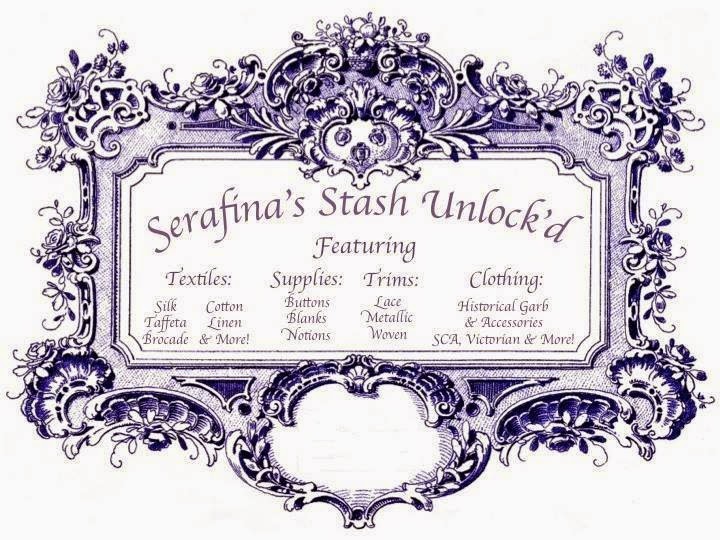 Quite a bit of the SCA garb is spoken for, but there is still a whole lotta Victorian, Romantic & 18th c stuff, as well as so many hats and veils, I don't even know what to do with myself!

The fabric stash barely looks like it's been touched after the last two sales, and I still have way too much -- so if you are interested, and are not able to come in person, drop me a note & I'll post pictures & have an online sale.  :)