I recently found a new (to me) blog of note, “All Things Vintage Rouge”.  Yesterday, Lulu posted about some completely fabulous aluminum tubing panniers she found at the Berkeley Rep warehouse sale.  (of which I’m insanely jealous of.  That’s the ‘confession’ bit of the title)

They give an absolutely fabulous shape, and appear to be very rugged.  I had assumed that because they came from a costuming shop and looked so odd, they were the figment of a costume designers’ imagination.  How very wrong was I?!

Today while browsing for more information on panniers, I found these bad boys on Costumer’s Manifesto.

The image comes from Maurice Leloir's “Histoire du Costume”, a sketchy source to be sure  – however, I know there are extant ‘skeletal’ panniers out there, though I’m not certain any of them are made of tubing or have the articulation shown in the diagram above.

Apparently, these are the panniers that the Leloir sketch are based upon, however, I’ve not been able to find more detailed information about them.  I am guessing that they do indeed fold as shown in the drawing, and the ‘bones’ are indeed tubular metal. 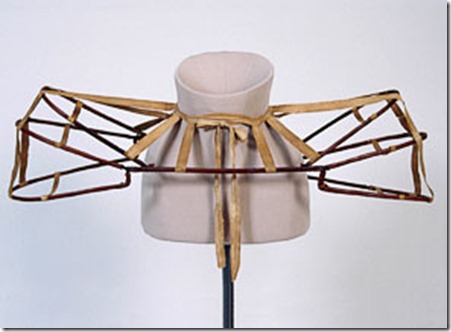 I’m not terribly sure that these three pictures are representing three different sets of panniers, or if they are different pictures of the same item*. 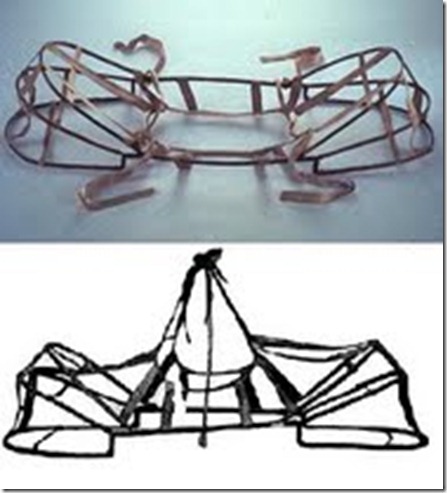 It’s hard to tell from the pictures, but they look similar enough to Leloir’s diagram, but it’s entirely possible that these panniers are also articulated.  I’ve yet to find any further information on them, but hopefully I will be able to find out where they came from and if they do indeed fold up like the diagram shows.

*I’m having a horrible time trying to find the original source of these pictures, – If anyone knows, please message me!!  My Google skillz are failing me.  I found the first picture here, and the other two here.