I’m going to be doing panniers somewhat like the ones I saw at  LACMA earlier this year. 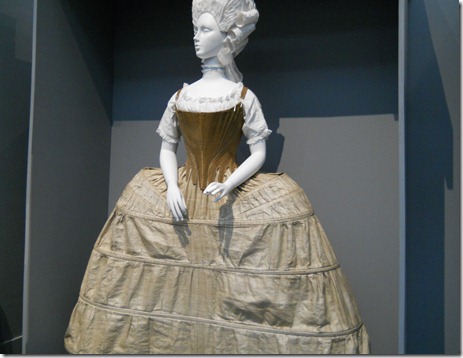 I’m making mine out of tannish-brown linen, with casings made of cream twill tape.  The original is made of plain weave linen and uses cane in the hoops.  I have cane I can use for the hoops, but I may end up using steel instead – that’s a decision I’m going to make sometime down the road; after all the casings are done and I can make Bertha try them on for me.

These bad boys are HUGE!  They are so huge, in fact, that they do not fit on my table, and I can’t get the whole thing in frame, even while standing on a chair! 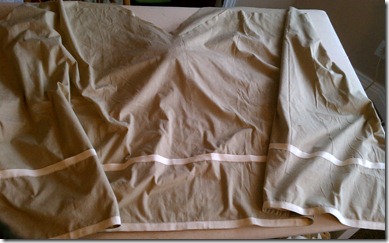 As you can see, I’ve constructed the ‘skirt’ portion, and I’ve been able to attach two casings before my shoulder (and other obligations not sewing-related) won out.  I’m not terribly convinced that I have this pattern all figured out, but I won’t know for until I get closer to the top and can mess about with the waist and gathering and whatnot.  I won’t be too terribly disappointed if I have to start over (other than the time wasted) since everything came out of my stash.

I originally was going to put the casings on the inside, but now I’m not so sure – I strangely like the contrast!  (Not that it’s going to matter a whole lot, I mean, it is underwear after all. 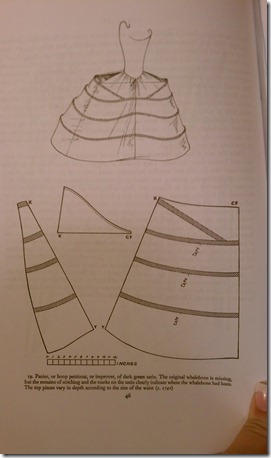 Another decision I will need to make is whether to do two bones at the corners as in the LACMA example, or one angled casing, like the one described in “Corsets and Crinolines.  I’ll most likely go with two, since I’m not sure how much strength my potential hoop boning will have.

I have two more enormous horizontal casings to do before I make any foolish decisions, however.  For this, I am thankful.

And with that, I am heading off to bed!