I first heard of trapunto a few years ago when I found the “Tristan quilt” while browsing through the Victoria and Albert collection online. I went searching for more information at the time, but couldn’t find any, and gave up on it, but always had it in the back of my mind as ‘something I’d like to learn one day’. 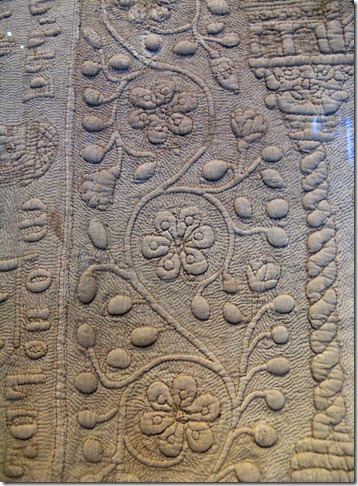 Fast-forward to the Southern Regional Collegium, and there was a class being taught on trapunto – I was SO excited!

I was planning to just link to an already-existing tutorial on trapunto, but I haven’t been able to find one, so I’m going to do my very first video tutorial*. The technique isn’t difficult, but is hard to convey through pictures.

From the “World Wide Quilting” page on Trapunto:

“Trapunto is a whole cloth quilting technique which produces a raised surface on the quilt. Trapunto patterns consist of vines, leaves, grapes, cherries and so on. The vines and straight line patterns are threaded with a soft yarn or cording. The rounder shapes are stuffed with small amounts of batting inserted from a small slit made in the backing fabric. After the shapes are stuffed, the slit is whipped stitched closed. A second backing fabric is then added to the quilt and normal quilting is done all around the previously stuffed shapes.
Another style of Trapunto uses a loosely woven fabric for the quilt backing. Then, instead of making slits in the backing to stuff shapes, a needle is used to carefully push the backing thread apart to form an opening for the stuffing. The threads are then carefully pushed back into place. This eliminates the need for a second backing fabric.
Trapunto originated in Italy in the early 16th century. It appeared in the United States in the the late 1700's and remained popular until the Civil War.”

2. Layer the top fabric behind the backing fabric in a hoop frame & back stitch over the designs.

4. To stuff lines, use a large upholstery needle threaded with yarn and thread the yarn or cord through the channel. For curved lines, you will need to poke the needle back up at the apex of the curve, and sink the needle back through the same hole to continue around the curve.

5. The last step is to quilt the trapunto piece to the final quilt backing fabric. In the ‘Tristan quilt’ , the un-stuffed background is stippled with a running stitch, and additional detail is provided in the padded areas.

Other links of interest:

* I’ve learned a lot going back through the videos – I need a better setup for sure! I apologize for the beeps in the 2nd video and the sea-sickening back-and forth in the 3rd video! I mis-spoke a couple of times in the videos, but I think you’ll understand what I mean even if I’m babbling like a loon most of the time! My stitching isn't the prettiest; especially the stippling at the end, but you get the idea!