It's less than a week away!

The good news is, both Melia and I both have underpinnings completely done (save for the odd button/hook), and both of our skirt ensembles are within a hairs breadth of being completed.  (leaving bodices & hats left to do...)

I originally was going to base my gown on an extant Victorian gown that was made to resemble an 18th c riding outfit.  It was perfect - I was going to do a 'quail' themed hunting outfit (I even had the perfect accessory for it courtesy of the ever-amazing Holly of Sable Greyhound), cute, right??  I even had the fabric in my stash......or so I thought.  After figuring out the concept, and getting really really excited about it, I found out I was short about 2 yards of brown velvet.  I went to EVERY fabric store within 30 miles, and not a single shred of brown velvet to be seen!

I hemmed and hawed and finally decided to use up the plummy purple silk that has been swimming around in my fabric stash for ages.  The problem is, I couldn't settle on exactly what I was going to do, so this gown is kind of a mish-mash of different gowns I have seen and liked, but oh boy, it's been a struggle!

Unlike Melia's gown, I didn't have a specific extant gown or period illustration we were (at least loosely) inspired by, which usually feels like I have more creative licence.  However, I just could not make up my mind about pretty much anything!

To make matters worse, my sewing machine has had some pretty epic tension/bobbin art issues - making everything more aggravating than it ought to be.

Yet again, my costume closet has come in quite handy, and a corset and bustle were available for my gown.  (Hurrah!)  Out of the bustle options I had available, I had an elliptical (so more proto-bustle, than actual bustle-bustle), and a much later lobster tail bustle.  I decided to go with the elliptical, because, yanno....bigger is better?

Between being extremely undecided, fighting with my sewing machine, and trying to figure out the brave new(ish) world of Victorian era clothing, the whole project is taking a bit longer than I would have anticipated, but all in all, I am pretty dang stoked. 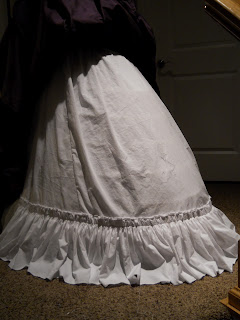 I used TV202 for the petticoat, and it went fairly smoothly, although  I struggled with the hem mightily - so I hope it works out in the end!

Were I to do it again, I would make the gathers much less full....but I was not about to re-do them after the 6th time messing around with the hem! 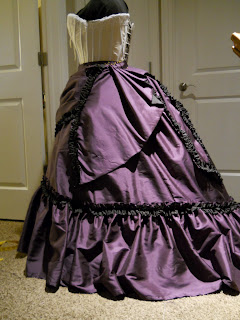 I used the same skirt pattern,  TV202 for the skirt.  Which would have been ok, except the back panel was about 6" or so too wide for my fabric, and I made the unfortunate decision to not piece the back.  I really ought to have pieced the back....lesson learned - don't make big decisions late at night after a long day of sewing!

I'm also not entirely sure I am enamored of the hemline.  It seems to dip up in the front too dramatically, instead of being flat across the front, and then gracefully curve 'round to the back....but as I have not actually put it on yet, that remains to be seen.  If I really, really hate it, I can unpick the ruffle, and mask the skirt hemline by moving the ruffle down a smidge in the front.

I really wish I had make some tucks in the back like this extant gown (which may have made up for some of the loss of width!) - but I guess that is something to keep in mind if I ever do another one!

Which leads me to the trim for this gown....Melia found an extant gown that had some lovely ruched fabric trim that I just kind of fell in love with.  The bad news is, to do exactly the treatment that gown had would take far too long (it's all box pleated and frayed to a beautiful fringe finish) - but it got me thinking of using a fabric trim, rather than selling off one of my kidneys to go to the fabric store and rustle up some trim options.  The good news for me is, I had some black silk taffeta left over from a previous project that would go smashingly with what was turning into a half-mourning gown.  (Purple was a popular color for half mourning, so black trim is incredibly appropriate!)

Right now, I am trying to decide if I am going to put trim of the waterfall portion of the overskirt - if I leave it, it looks like I forgot to put trim on it, if I put it on, there would be stitching showing on the black side so....decisions, decisions!

I've spent the vast majority (ok, ALL) of my budget on hat fripperies and some insanely-priced buttons that were far too perfect to pass up.  (seriously, by far the most expensive buttons I've used, ever - and the most pricey item not from the stash!)

And speaking of the hat.....I have (what I think) is a pretty cool trick up my sleeve to make the hat extra-special.  I am actually kind of ridiculously excited about moving on to the hat so I can see if my super seekrit idea will actually work or not!

I'm really struggling with how to work all the bodice/skirt pieces together, and I'm desperately trying to decide what kind of sleeves to do.  (Suggestions so welcome, btw.....)  I guess I have until this afternoon to come up with some sort of a plan......