Get to know your iron!

Learn to love your iron, and it will love you back

Seriously.  Iron EVERYTHING.  Iron pattern pieces so they're not all wrinkly and wonky.  Iron fabric before cutting it out.  Steam seams after sewing.  Press open/over every seam.  Seriously.  Do it.

I know it sounds like a ton of overkill, (Especially to a beginner.  I know, I resisted too!) but when I finally learned to give in and use my iron at every step, my sewing pretty much instantly looked better, with no new skill other than taking the time to use the iron.  Don't fall into the trap of "oh, I'll press that seam open later"....it will never be as easy to press it now, before it's sewn into other seams.  I promise!  And that underarm gusset??  The best time to give it a good pressing is before it becomes an underarm. 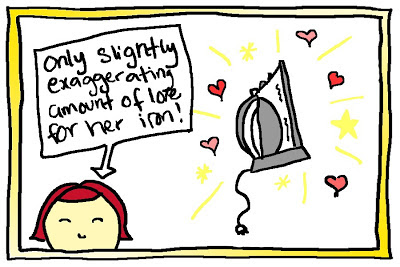 Along with making friends with an iron, here are a few tips I've collected over the years:  DISCLAIMER: This is what I have found to work well with my iron.  I've never owned a teflon iron, so I do not know if any of the below will work.  (obvs. the abrasive stuff is right out).  So, proceed with caution.
Coming soon:  Ironing and Ironing Accessories