I decided I’m going to at least attempt a period-correct pair before falling back on my Effigy stays.  They’ll do in a pinch, but I’d rather have something that’s actually meant for this project. 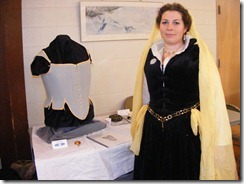 I’ve had this Reconstructing History (#833) “1740s-90s Stays” pattern for a couple of years, and decided it’s time to pull it out.  I’m slightly disappointed at the level of instruction in the pattern, so I’ll be surfing the blogOsphere for dress diaries to see if I can figure out how these are supposed to be put together.  Not that this is a new situation for me, I rarely use patterns to begin with, so I’m actually ahead of the game this time.

I’m feeling pretty uninspired when it comes to fabrics for my stays.  I think they’re going to end up plain-jane black!

I’ll be doing the half-boned stays in the lower-left.  So far, I’ve ‘shopped’ in my stash and I’ve gathered up some black coutil, black silk taffeta, and black twill. 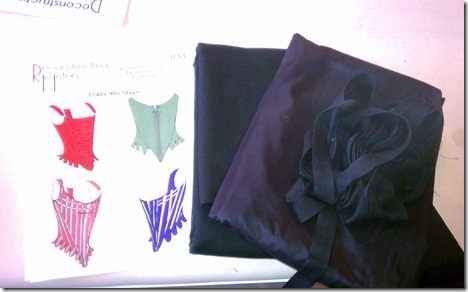 After this Saturday, I’ll be working either on the stays, or two sets of panniers.  Hm.  I’m not looking forward to these stays, and I’m not in love with my color (or lack thereof) choices, so I may end up working on the panniers instead.  Hmmmmmmmm.