Sorry folks, it’s been a weird, weird weekend, interspersed with not feeling too swell….makes for a bad time for posting!

On a brighter note, I’ve been hand-sewing the hem of the red dress, and the hem is now done.  (I never thought it would end…..I ended going around the hem four times in different spots to make sure the felt stayed where it ought to be.)

Some awesome new developments have come up RE: Barons War.  Jaquelinne has offered up her  black work strip for the red dress!  It will either become the inside band of a partlet collar or the front band of a camacia – either way, I’m SO excited!  You can see her work over here….go look!

Praksedys has offered up her skills to create lacing for the red dress, and that is quite a weight off my shoulders.  She’s an amazing woman!

Also, my brother in law has agreed to arrange the dinner.  He has been going above and beyond, and I am so excited what he comes up with, because right now we may need to invite the entire Kingdom to eat all the nommy dishes that he’s cooking up.

Dressed pheasant via “of food great and small” 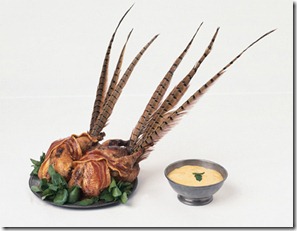 I told him that I had wanted Cornish game hens and spinach & goat cheese salad, but he was free to add to that menu; and he has completely run with the whole “game bird” idea.  (I *heart* wildfowl.  Like, seriously.)

Peacock served at a feast via  “History Undressed” 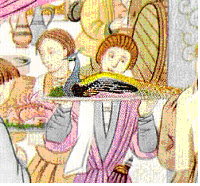 From what I hear, there is going to be a whole spread of game birds (game hens, quail, pheasant, potentially duck or goose), a couple of rabbits, and the crowning glory……….a roast peacock*.  YES.  I will have a peacock!  Instead of stuffing the poor bird back into its skin after roasting**, I’m thinking of arranging clean tail feathers at the back, and gilding the bird.  I need to do some more research on that, but that’s my initial plan.

Peacock served at a feast via “Larsdatter” 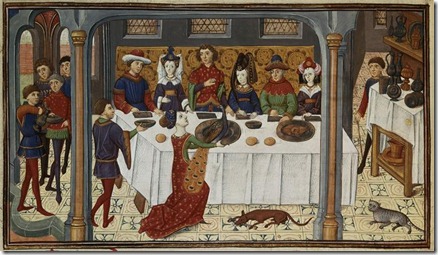 *For those totally grodied out by game bird and/or rabbit, there will be plenty of other (less weird) foodstuffs available.  I’m not sure, but I may be taking reservations to the extent of finding out how many people would need/want meats other than fowl & coney.

**I’m not entirely sure it’s hygienic, even if the skin is cooked (which may actually destroy the feathers anyway)….birds tend to be kind of dirty little critters.

Email ThisBlogThis!Share to TwitterShare to FacebookShare to Pinterest
Labels: Other Stuff