I’m gonna be kind of full of woe for a minute here, so apologies in advance!……………….I’m feeling massively uninspired RE: Partlets.
I’m nearly finished, but not so much in love with my first attempt:  (It’s nearly finished, so I’ll probably just finish it off and hide it somewhere in the back of my closet just so I have it if needed.  (One can never have too many partlets?)  The original plan was to put spangles all over the edges like in a bunch of portraits in Moda, but I chickened out before I got that far. 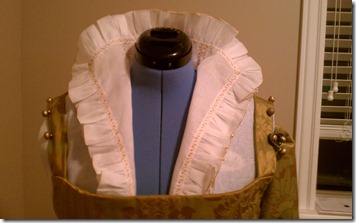 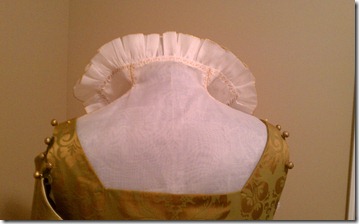 Which is meant to be kind of if these two had weird, fugly babies:

At any rate, I decided I didn’t like it (too many things wrong to detail here.), and was going to start again, only this time I was going to try a different style.  I think I stopped myself from committing too much time to this one before I realized I didn’t like it…..and I’m not liking it.
I’ve gotten as far as gathering up the entire yardage on gold cord before I hit the brakes. 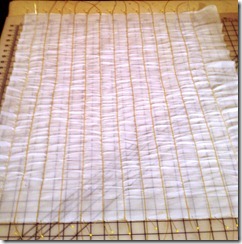 It was meant to be somewhat like this one, only a bit more-different-other.


I really need to sleep on it and see what I think in the morning, but my next attempt will probably be either a simple collared one:  (I’ve actually made the one on the right for Aine, so I know I can do it, as long as I get out of this weird funk)

Or a gathered-neck style:  (Only probably less crazy than this one, I just like the black spangles!)

I’m taking a break tomorrow to go to my baby brothers wedding reception, so I’ll have plenty of time to take a break from sewing for a minute or two, recuperate, and ponder my next move!