Wedding Dress update, and another tip

If you’re working on fabric (like silk) that tends to suck down into the throat plate of your sewing machine when starting a seam, start sewing on a firmer fabric, then without cutting the thread, run onto the fabric to be seamed. 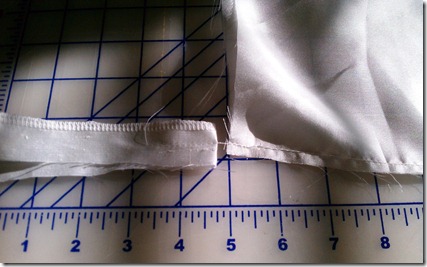 Also, I’m really wishing I had one of these pairs of scissors right now.  (No, my sewing gadgetry collection is not complete, despite any evidence to the contrary!) 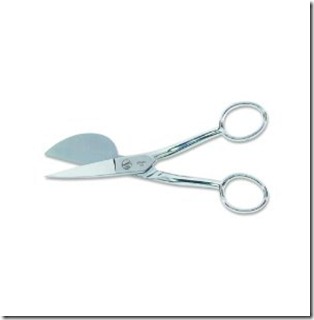 A lot of blabbing to say, yeah, one can never have too many specialty tools!

But what you really want to know about is how I’m coming along on the dress, right?

I’ve sent pictures to the client, and I’m hoping she likes where I’m going with it.  The bodice is ending up a bit higher than on the original inspiration picture, but that may not actually be a bad thing.

Another thing I need to find out from her is about the lining….the chiffon is pretty dang sheer – and I’d like to at least 3/4 line.  I can’t tell, but that may also be deviating from the original, but since I only have a couple of small photos to go from, it is hard to tell.

Onto the pictures!  (The pictures themselves are actually quite nice today, however, my excuses now have to do with the skirt….its only roughly pinned in place, and will be gathered properly when the time comes!)

I’m nearly at my stopping point for today since there is relatively little I can do until I hear back from my client, but that’s probably a good thing, I’m really beat!  Besides, it’s quickly coming up to zipper time, and I’ll need ALL my strength for that…..I hate zippers infinitely more than gathering…………