Whoa, so that happened…..

I’m in quite a state of shock, and doesn’t quite feel real, but I was asked today if I would consider joining the Order of the Laurel.

I made a bit of a fool out of myself (complete lack of sleep + overwhelming emotions etc.) in court, but hopefully I’ll be forgiven!  Embarrassingly enough, there also seems to have been video taken of the whole affair.

It was quite magical, and I was completely and utterly taken by surprise!  I’m sad my sister and my husband missed it, but then again, this is just the announcement, so there is plenty of time to make sure they can both make it for the ‘real deal’.

I only have a few teeny cell phone pics of the announcement, but I do know there were some other shutterbugs in the populace, so hopefully I can find more pictures in the coming weeks.

This is actually a great picture setup; Duchess Caryn von Katzenberg (my grand-Laurel….who actually won K A&S, by the bye) is on the far left in the white coif and Elizabethan jacket, then next to her in the white kirtle is my Laurel, Mistress Bethany of Windermere (Caryn’s Apprentice).  Then me, (the grand-baby) finally making my way down to the gathered Laurels. 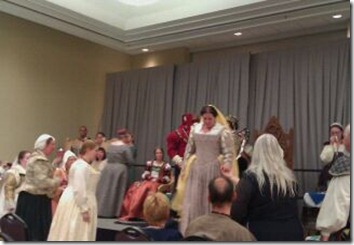 Thankfully, I didn’t look like utter crap – I was sorely tempted to take the easy route this morning and throw on any old thing, but I didn’t give into temptation, and made a bit of an attempt….though closing court was nearing the end of a frazzling event, and I wasn’t as (ahem) put together as I otherwise try to be.

Though now I think it’s high time I get some sleep, I only just now was able to say “hello” to my poor doggies after a very, very long week!

I’ll have much more to say on the matter in the light of day, I am sure!

Email ThisBlogThis!Share to TwitterShare to FacebookShare to Pinterest
Labels: SCA