As much as I love the elegance of this shoe, it looks a bit tricky to walk in; also the geometry of the heel looks none too stable – I’d hate to break it off in the first wearing! 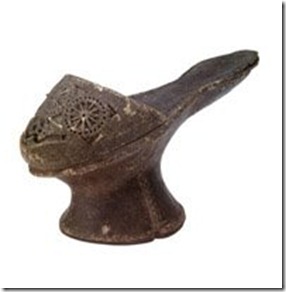 The easiest chopine to construct (and walk in, I would imagine) are the “Spanish” style chopine. Not very elegant, but serviceable for creating height. 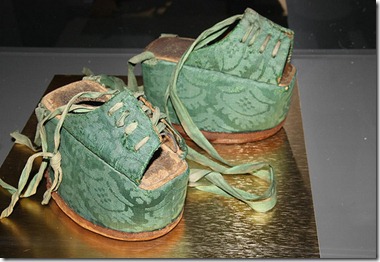 I could probably knock these out all by myself without any power tools at all, but then again, honestly, they lack a certain ‘sex appeal’.

After flexing my Google muscles, I found what might be an acceptable compromise: (The red velvet pair on the left) 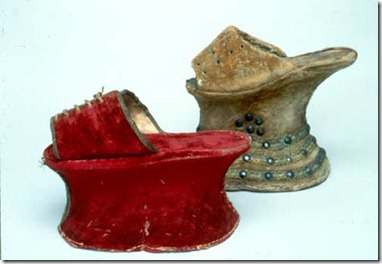 I’m not terribly enamored of the Spanish-style lacing, but the curves make up for it. The curves aren’t so drastic that I’d worry about snapping off the heel, and the base seems wide enough to keep me nice and stable.

It is paramount that these chopines are comfortable enough to wear, since my gown is constructed to be worn with 6-6.5” chopines. (Yeah, I went a bit overboard on the height. Go big or go home, right?) EDIT: I tried on the gown again, and it’s looking like 4-4.5” will be plenty. Anything over that will be icing. Also, I just purchased some yoga blocks on amazon.com, so hopefully they will be stable enough to use. (I bought 3, two for the base, and one to stack for a heel if more than 4” are needed.)

I’m a bit stalled on the gown right now, since I can’t decide if I want the tuck to be on the inside or the outside; there is evidence of both methods, but I don’t want to decide until I know about the potential hem trim, since that could affect (effect?! dang, I can never remember) the over all look. I’m slightly leaning towards an inside tuck, but that is still TBD.

I also can’t start on any of the shoulder treatments or sleeves, since again, I’m waiting on finding out about the stamp.

Today, I am going to start on either the camacia, the petticoat, the partlet, , or rehab of the bodice, but I’m so indecisive, I’m posting instead!

EDIT II: I am getting more and more excited about this gown….I just spent the last 15 minutes swanning around my sewing room picking up all manner of crafting detritus with the train. sigh.