Because boofiness (yes, “boofiness”) is the name of the game for this gown, I’ve made a petticoat out of one of the many gold brocades I have hanging out in my stash. 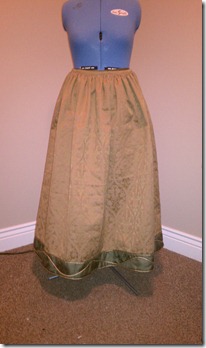 I felt it needed a guard, and dug around until I found some green silk. (I really wanted some green somewhere in my outfit)  After I got the silk sewn down, it felt very plain.  I dug through my stash again and found some gold cording and did a simple design on the guard.  (Also did dual duty as stiffening the hem just a touch more)  I’ve dabbed glue at each of the cord joins – this gold cording is a fraying monster!

I may or may not add another, thinner guard above.  But as it is, the petticoat is properly boofy and will serve it’s purpose. 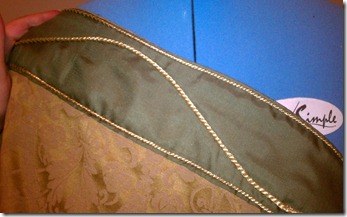 I ended up ripping out the stitching in the neckline and doing some internal surgery on the bodice and pad stitching some felt in.  I like it loads better now.  (Learn from my mistakes – it is very difficult to go back and fix certain things!)

The bodice looks abnormally long when on Bertha, but on me, it’s not that bad.  It’s a touch longer than I would have liked for this particular style, but because I’m a goober, I didn’t check my existing pattern before I started.  (The pattern was originally for the bodies that go under my coats, so the waist is just a smoodge longer than ‘normal’ so the layers of pleats stack upon one another without making the coats’ waist miniscule……I also have a ridiculously long torso and short ass legs!) 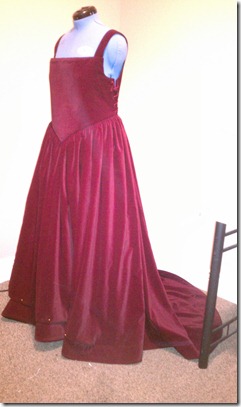 Bertha also suffers from ‘noassatall’ syndrome, so the skirts end up hanging flat down instead of boofing out nicely over the derriere.  I’ve got no problem in that department.  (d’oh!)

Out of all the pictures I’ve posted so far, this particular one most accurately reflects the true color of the fabric. 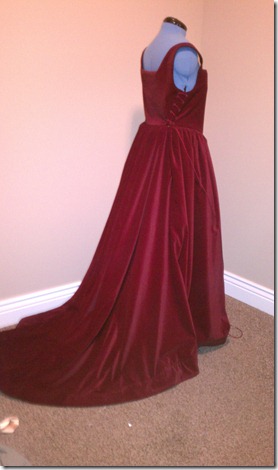 I don’t really have anything to say about the following pic, other than I love the train.  teehee! 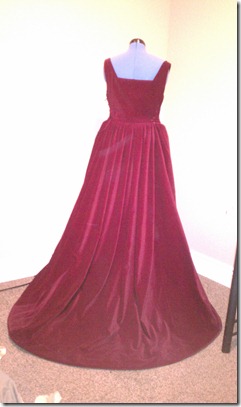 Also, because it makes me laugh:  (from watching “Dual Survival” today)  Sometimes I have the humor of a kindergartener.

Dave:  Looks like a freakin’ coconut.  Where’d you get that?

Cody:  Where the elephants are pooping.