This is the most organized my patterns have been since I had the Sewing Basement Room O Doom!  (But I also had far fewer patterns at that point in history!)

I am really quite excited, hopefully I’ll not have to go through the pain I’ve been experiencing lately when trying to find patterns!

My most used patterns* I usually just have pinned to my board….that is a scary proposition!  I want to go through and copy my top patterns*, as some of them are getting pretty ratty, and then store them somewhere else, just so I always have a back up.

I bought four tubs, but only ended up using three – there is an amazing amount of storage space in these babies! 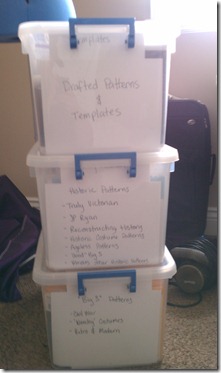 I have the three tubs separated into major categories:

Here is the interior of the “Drafted Patterns & Templates” tub.  This tub makes me happy, as it is nearly as full as all the other tubs, and is all my own work!  I think this tub is deceptively full, as I don’t draw out skirts (they’re easy peasy to draft, and seems pointless to have an actual pattern for each person/outfit), whereas the other patterns do – that’s a lot of room! 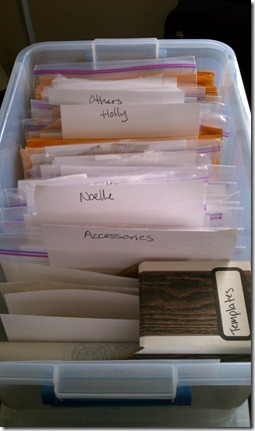 Next up is the “Historic Patterns” tub.  This tub is full of patterns not from the “Big 3”, with the exception of the very few “Big 3” patterns that are actually worth a crap.  (Historically speaking, anyway)  That is not to say that every pattern in here from a ‘historic pattern company’ is worth a crap (there are some stinkers in here, to be sure!), but is better than the very obviously costumey stuff in the other pattern tub. 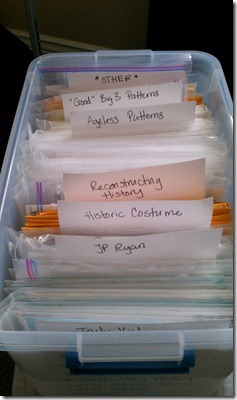 And last, but not least is the “Big 3” tub.  There is actually more companies than “The Big 3”, but is an easy name for the tub! 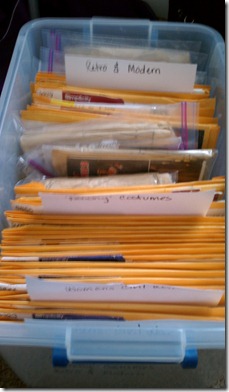 I think this is the very first time in a very long time that I’ve actually gone to the effort of putting away all those ‘floater’ pieces.  (You know, the little pieces that get separated from the envelope and then multiply in the bottom of whatever pattern storage method you’re using.  Yeah.  I had a lot of those.)

A little note about pattern storage.  I used to use manila envelopes, and paste the commercial envelope or write the description (if I drafted it) on the outside.  This makes for tidy storage, as the envelopes are fairly rigid, and stack nicely.

However, stuffing patterns back in such a rigid envelope isn’t the most convenient thing in the world, and as I’m a visual person, writing descriptions on the outside until I’m blue in the face isn’t going to help much, since I’m usually looking for “that one pattern that I drew in pink marker and made notes with blue pen….you know, the one……”

So, I’ve transitioned into the gallon ziploc baggies.  This isn’t a perfect solution by any means, but now I can see the contents of the packet and easily (or relatively so) fold and pack patterns.

In my recent shopping trip, I also bought a packet of cardstock, which I used as dividers, tub labels, and as a stiff insert for the ziplocs.  My ziploc’d patterns stack much nicer now that there is something rigid giving the limp little baggie some body.

So now, after all of that…….How do you all store your patterns?  Do you have and tips or tricks you’d like to share?

Email ThisBlogThis!Share to TwitterShare to FacebookShare to Pinterest
Labels: Patterns