Chopines–I do have an update!

I gave into temptation and only swept the floor….waxing can happen another day!

To recap, this is what I’m going for…something sexier than the Spanish style chopine, but less crazy that some of the later Italian chopines.

I am not a power tool expert, as I’ve found out, and my finished product certainly shows this. In carving out the base, I realized I probably wasn’t going to be able to achieve the curve….I just don’t have the finesse to do it, so plans changed half way through to a more bulbous hourglass shape. I’m not entirely convinced I love it, but I’ll keep thinking on it and I’ll see how it goes.

Here are the blocks straight out of the package:

I drew in the center lines on all surfaces to help with centering the sole pattern:

I carved a channel next to the sole outline to make it easier to cut: 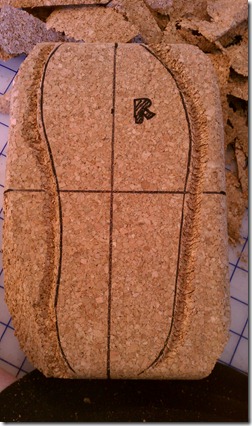 Then started cutting off the excess: 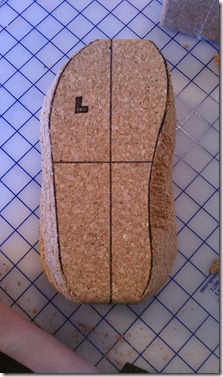 Then flipped it over and did the same to the underside: 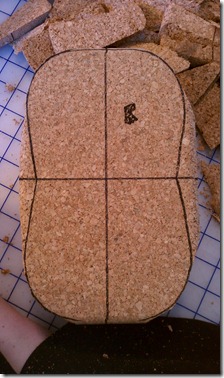 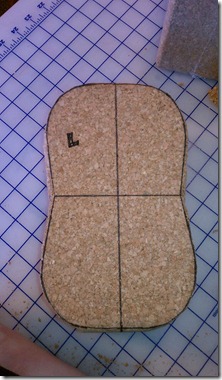 With all the cutting implements I tried, I found a small butcher knife to be the most efficient, oddly enough!

After all the cutting, I only had a rough shape outlined, and I have a whole pile of cuttings to show for it! 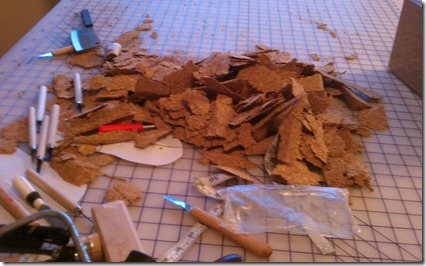 After that, I set up a grinder wheel to (what at the time) I had thought was to only finesse the outline. What I ended up doing is covering the entire garage and myself in a thick layer of cork dust. (I just got out of the shower…..I couldn’t even brush off that nasty dust…it stuck to everything!)

But after all that, here is what I ended up with. I’m not overly happy with them, but at the same time, it’s my first attempt at making chopines, and using power tools! (eeep!) 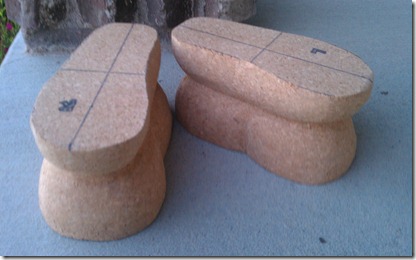 My feet are just a bit larger than the base, and I’m still trying to decide if I’m going to overlook the overhang, or go with the original plan of a stacked leather sole to compensate.

EDIT: I'm going to take the trusty knife to them and see if I can't smooth out some of the bulbousness.....I'm not liking the shape so much right now.