My good friend Jaquelinne came over yesterday, and it was quite the productive sewing day!  She finished off her bodice for her new side back lacing kirtle, and I got 8 curtains sewn.  (Sounds like I didn’t do much, but boy, hemming all four sides of enormous curtains takes a while!

This morning, I painted the hems of all eight curtains with ‘champagne gold’ fleur-de-lys.  The original plan was to do a ‘semy of fleurs’ look, but since the weather has been so craptastic, I couldn’t do it outside, so hems it is.  (My table isn’t big enough to accommodate an entire curtain!)

I painted on vertical of left and right for the ‘opening’, and may do more if there is time.

But for now, here’s the hems: 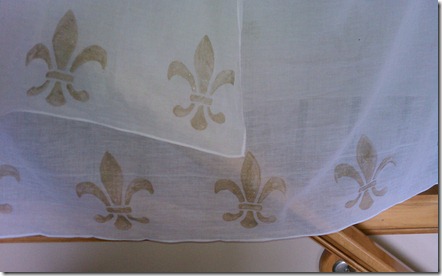 This morning I went out and bought a whole grundle of canvas to make the shade fly out of, and that is next up on the list.  I just need to figure out the math for it (with the help of hubby, since he’s doing the hardware for it), but until then, I’ll content myself with making as many dags as I can stomach!

Here are the colors for the shade fly:  (I had very nearly convinced myself to do all ‘natural’, but as there was only half the yardage I needed, that prompted me to throw in my favorite green into the mix) 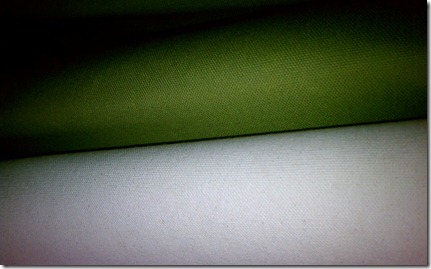 I want to get as far as possible on the shade fly before my cork for the chopines show up, because who knows how long that’ll take!

Also, hopefully within the next day or two I’ll know about my die stamp for the cutwork so I can get back on the gown.  It’s killing me that it’s just sitting there, with no progress!