And here is the fruits of my labors….chopines that fit, and are relatively easy to walk in!  I still have the decoration to do, but they’re functional now, and that is quite a relief. 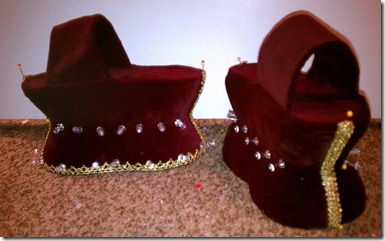 I need to go out shopping (yet again) and grab as many gold brads as I can.  Because my gold lace is so thin, big huge upholstery tacks would look a bit….off.  (The picture below has a tack in the lower point right in the middle of the picture….it’s barely visible!) 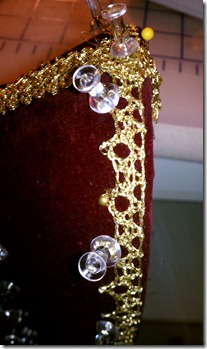 I’ve been reminded to talk about my sources – I get so wrapped up in the project itself, those details seem to slip!

The fabulous website “Chopine, Zoccolo, and Other Raised and High Heel Construction” has been an invaluable resource.  It’s where I first found the idea of using cork yoga blocks as the base.

That actually was one of the first diversions from the information provided therein – it was suggested to not use the blocks for chopines, but I felt that due to the minimal carving out involved, I’d risk the blocks in favor of the purse – the suggested cork was very cost-prohibitive, considering all the other projects pulling at my pockets.

My main reference was the lesson on chopine construction.  Specifically the most helpful was the information on sewing the sole, and the suggestion of using the bench grinder, which worked a charm, but in the end was very, very messy, and more than once took a large chunk out that I was not meaning to.

If I were going to do chopines again, I’d use only a knife and an orbital sander with a rough grit.  (I used the sander when taking out the curve, and worked just as well as the grinder, but was much more maneuverable, and far less messy)

Here is a brief list of some of my diversions from the information provided:

Hopefully I’ll have fully decorated chopines to photograph tomorrow….I just need to figure out what I’m going to do to the toe bit…I have the soles all figured out for now, that is until I change my  mind yet again!