Finally, at long last, I was able to completely finish a project….I am so excited! (And my wrists are thanking me, too!) After weeks and weeks of unfinished projects, it feels so good to be able to completely check something off the list-O-doom.

I spent most of the day finishing up the sole and doing the decoration – which sounds like it wouldn’t take that long, but with having to run to the store, stopping to chat with friends, and being indecisive about the lace, it took a while!

My original plan was to do the very simple braid covering the seams like on my original inspiration chopines….however, the more I thought about it, the more I wanted to put more bling on them. I think they turned out quite nice for my first ever shoes, if I do say so myself!

There certainly are things that I would do differently if I were to do them again, but nothing that actually bugs me enough to worry about.

I thought about doing something boufty and cute on the straps, but I didn’t want things getting caught up in my petticoat, so I decided on a flat lace & a small medallion instead. I haven’t seen anything to directly support this mode of décor, and I’ve only seen one pair so far (much later period) that has the braid around the top…..so both those things are questionable, but I like the way it looks, so did it anyway. The upper braid also does double-duty of covering some of the bumpiness from the transition from the leather sole to the cork…in another pair, I will be more careful to shape that portion properly. I wouldn’t hate the way it looks without the braid, but it certainly does detract from that area…I didn’t realize it would show quite so much!

I can’t find my ‘real’ camera, so cell phone pictures it will have to be for the time being, but I can’t wait to post about them, so here they are! 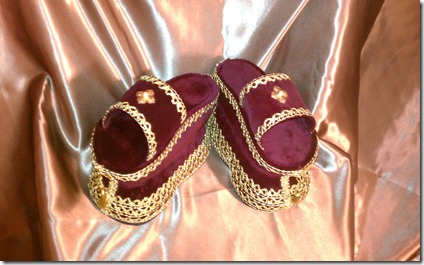 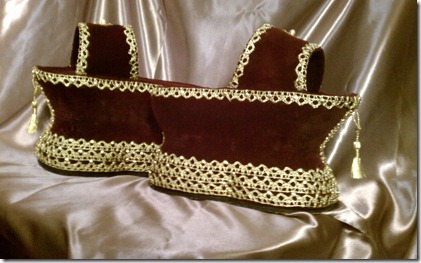 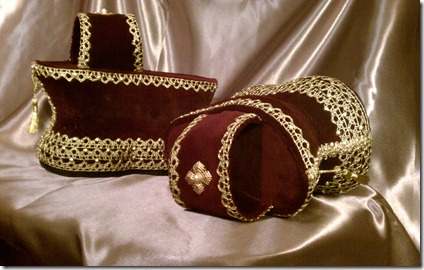 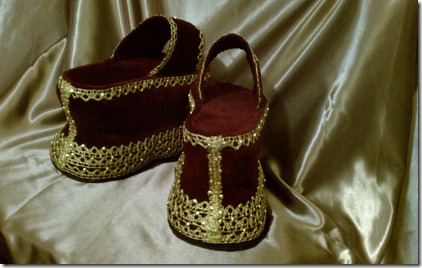 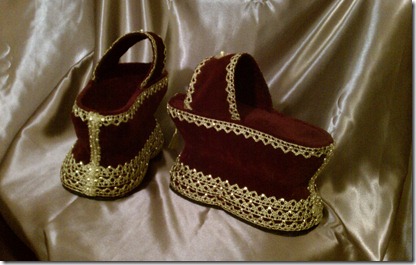 And now for some foot shots! 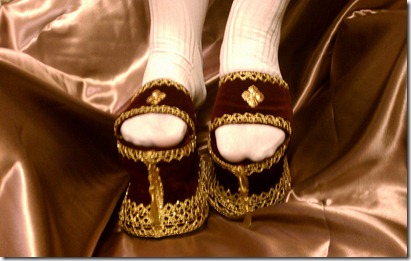 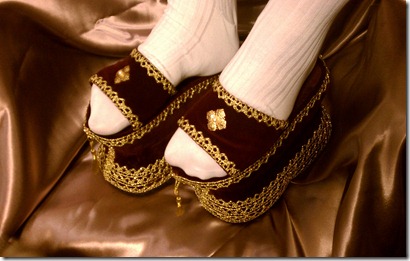 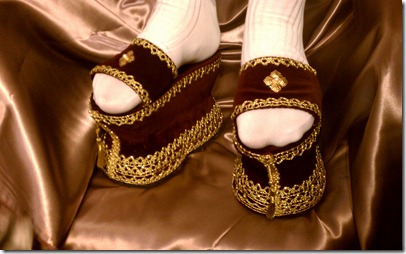 And for good measure, here’s a couple of pics of my good friend Holly trying on my gown, complete with chopines: 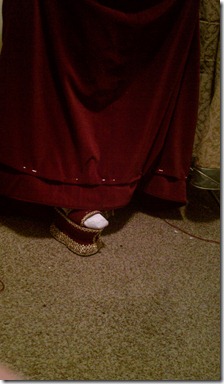 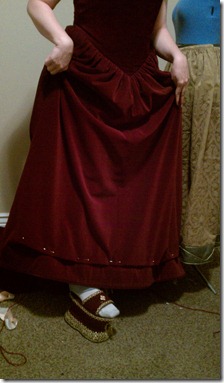 It takes a little getting used to, but they’re relatively easy to walk in, and are very comfortable.

The biggest change I would make is some sort of angle to the foot bed…having them so flat almost makes me feel like I’m tipping backwards.

Another thing I would change is the angle of the curvature on the sides; which has always kind of bugged me throughout the project, but never was able to get quite right. (I am so glad I went back and took out the bulbousness of the sides….I doubt I would be nearly as happy now if I had not done so.) I was a little nervous about making the curve too drastic and weakening the integrity of the cork, so that may have to be something that happens with a wooden or high-density cork version.

All in all, I’m really quite pleased with them, and with myself for being able to do so many new things all in one project!