Excuse the following….I am super excited and I’m blabbing.  A lot……

One of my very good friends (Reecey-Pants) is going to New Orleans for a week for work, and invited me along.  OMG, YES!!!!!!!  I love, love LOVE New Orleans!  We won’t have a car so we won’t be able to get out to Baton Rouge & Plaquemine, but then again, one whole week in the French Quarter hardly seems like enough.

I’m bringing my camera, my sketchbook, and I’m going to have a fabulous time.  Too bad the friend I’m going with doesn’t like sea food.  (WTF, how can you go to New Orleans and NOT LIKE SEAFOOD?!)

Anyway, the following is a list of things I’d like to do, any other suggestions??  I have all day during the day to fill up my time, and then after my friend gets off work, we can go do whatever she wants to do. 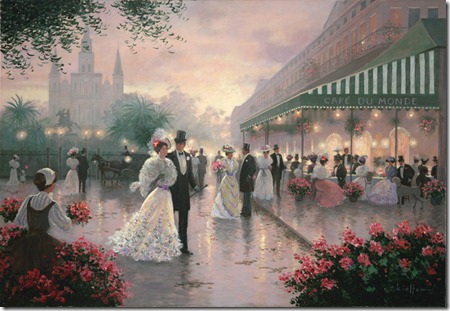 Café Du Monde  (Completely and utterly a must.  It’s not so much ‘something I want to do’, but a place I’m going to be if nothing else is going on at the moment.)

LSM Madame John’s Legacy (if it’s open – was closed last time I was there, and as far as I know, may be closed to the public forever.)

Haunted History Tours  (There are a bunch of them, and I’ve taken a couple already….I’m seriously thinking about the two Garden District tours…..a regular one and a spoooooooky one.  Heh.  Maybe, just maybe I’ll be totally nerded out and take the vampire one too.  HAHAHA)

Green Goddess (Suggested by Other Noelle – This place opened after I was there last, so a new place for me to explore!  She says “The "Mezze of Destruction" secret message should still give you a secret foodie easter egg of some kind, if you eat there and say it to your server. It's the secret "Neil sent me" code.” )

Delachaise Restaurant (Suggested by Neil Gaiman via Other Noelle.  If Neil says it’s good, I believe it!)

The Café Adelaide (Again, suggested by Neil via Other Noelle.)

Fleur de Paris, Custom Millinery & Couture Boutique (Suggested by Other Noelle.  Looking at the website just makes me DROOL.  And wish I were a size 2……..)